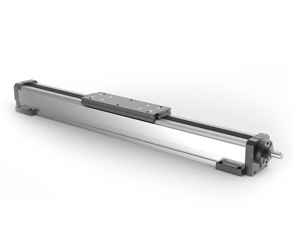 NIASA CMH rodless mechanical cylinders can form part of almost any type of machinery, as long as it exercises linear forces or moves one or more axes in a controlled manner. They are used separately, or combined with each other, given the multiple possibilities of combination offered.

Basically, they are mechanical elements that convert rotating entry movements into linear exit movements. They are characterized because their carriage (the element that exercises the force on the machine) is actioned by a nut, which in turn is pushed by a screw that turns.

Each carriage is fitted with either a single ballscrew nut (M), or a trapezoidal nut (TR) depending on desired speed, precision, work cycle, etc. (consult NIASA), and are supported by bearings on their ends. The carriages are mounted on a prismatic linear bearing rail that is fitted inside an extruded aluminum body. The set is protected from the exterior by the profile itself, its walls and a fastening band that crosses the cart in its movement, thus protecting the most critical part of the system.

When the loads and or times are important, the cylinders can include more than one carriage and/or complimentary prismatic guides can be added, with the aim of making the set more resistant.

Below is a list of some cases where rodless mechanical cylinders are applied, as well as the type of task that they perform.

Where a linear force is required:

Where movements are required in one axis:

Where movements are required in two or more axes:

Now adding a Diverter Arm or Conveyor Stop to your conveyor is simple.